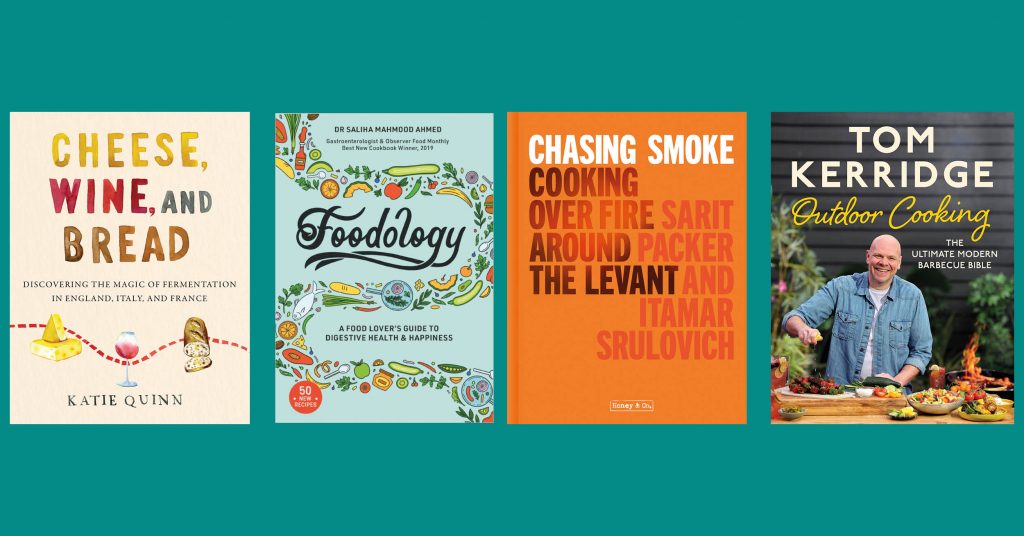 May has brought with it a raft of new cooks about cooking over flame, presumably hoping would-be readers would pick up a copy and dust off their barbeques as the weather improves.

As I write, hailstones are hammering against the window, so the new releases that I have flicked through are an aid to dreaming about warmer days rather than cooking outdoors.

Let’s hope the weather here in the UK picks up as the month progresses and the opportunity arises to try some of the fantastic-looking recipes in this selection.

If barbecuing isn’t your thing, not to worry. There’s two more books featured that have less to do with outdoor grilling!

This article contains affiliate links, which means if you click through to Amazon to purchase one of the books below, I will receive a commission.

Many will have heard that Tom Kerridge is returning to cookery books designed for us mere mortals with a manual on outdoor cooking, following publishing his Hand & Flowers Cookbook (which we reviewed here).

But before we get there, let’s consider a couple of barbeque-based titles from cooks you may not have heard of.

Chasing Smoke, Cooking Over Fire Around the Levant

By Sarit Packer and Itamar Srulovich, photography by Patricia Niven

Published by Pavilion Books on 13 May

Sarit and Itamar are behind the London restaurant Honey & Co, and this latest book is their fourth. It is a tour of the Middle East with a focus firmly placed on food cooked over coals.

The preview we have seen suggests recipes that blend the bold flavour of barbequed meat and veg with fresher flavours, such as Tahini BBQ lamb chops with fresh plums and spiced plum sauce.

And like all good food books, between the recipes are the stories. Reports of beautiful food from places like Egypt, Jordan and Greece all feature, evoking dreams of being able to hop on a plane once again and experience a new culture (not to mention better weather).

Food by Fire, Grilling and BBQ from Derek Wolf of Over the Fire Cooking

Published by The Harvard Common Press on 18 May

This book is from YouTuber Derek Wolf and covers recipes and a wealth of methods and materials needed for successful barbequing.

After all, there’s a lot more to cooking over flame than there is to switching the oven on.

The Leaning Salmon Plank With Lemon Dill Sauce dish, for example, requires you to nail a whole side of salmon to a piece of wood.

There’s also a guide to lamb al-asador – where you effectively crucify a whole lamb and slow-cook it over flames.

I’m keen to try this but worry that my neighbours might phone the police at the sight of me cooking a carcass in the back garden.

Anyway, there are more straightforward recipes, and it’s not all meat – there’s a good selection of veg dishes and sides and even some puddings.

Published by Bloomsbury Absolute on 27 May

This third book from celebrity chef Tom Kerridge will undoubtedly sell well. Tom has had huge success with both his pub and publishing.

Regular readers will remember I was impressed with his Hand & Flowers cookbook, which showcase some of the complex dishes that contributed to the pub’s Two Michelin Star status.

While I’ve not seen any press publicity about this book, a quick Google reveals Tom has long had a passion for barbeque.

Last year he fronted a mini-series on cooking outdoors on the Food Network, and he was talking to The Guardian about a passion for BBQ way back in 2017.

Published by Hodder & Stoughton on 13 May

As a gastroenterology doctor, winner of MasterChef 2017 and author of the Observer Food Monthly Best Cookbook of the Year 2019, Dr Saliha Mahmood Ahmed is well qualified to talk about both food and digestion.

This book is a blend of recipes, anecdote and science that offers readers a chance to think about how their body is processing the food we eat.

Early on, the book gives a reasonably detailed overview of the digestive system and which chapters cover more about various parts – from taste in the mouth right through to the rear end.

Along the way, things like the science of Umami, the influence of texture and the importance of our microbiome are all explored.

There’s even a chapter offering some recipes that may ease constipation.

All in all, this is a detailed book that any enthusiastic foodie would learn a lot from.

It’s one I will be reading in full and hope to review in some more detail in the coming weeks.

Cheese, Wine and Bread, Discovering the Magic of Fermentation in England, Italy, and France

Published by William Morrow in the UK on 13 May

Youtuber and podcast host Katie Quinn was a broadcast journalist before a brain injury halted her career path and caused her to reconsider.

While in recovery, Katie says, she increasingly became interested in food and began her channel, which today has 45,000 subscribers and has led to podcasting, more presenting and book publishing.

This is Katie’s second book and focuses on fermented foods, namely cheese, wine and bread (must have been challenging research!).

To understand those three staples of human diets, she worked at the famous cheesemonger Neal’s Yard Dairy in London, an Italian family of winemakers and travelled across France to learn more about bread.

This is a book that I imagine will be popular with an American audience dreaming of their own trips to Europe.

But the science behind fermentation is fascinating and I’m looking forward to picking up a copy and finding out more.