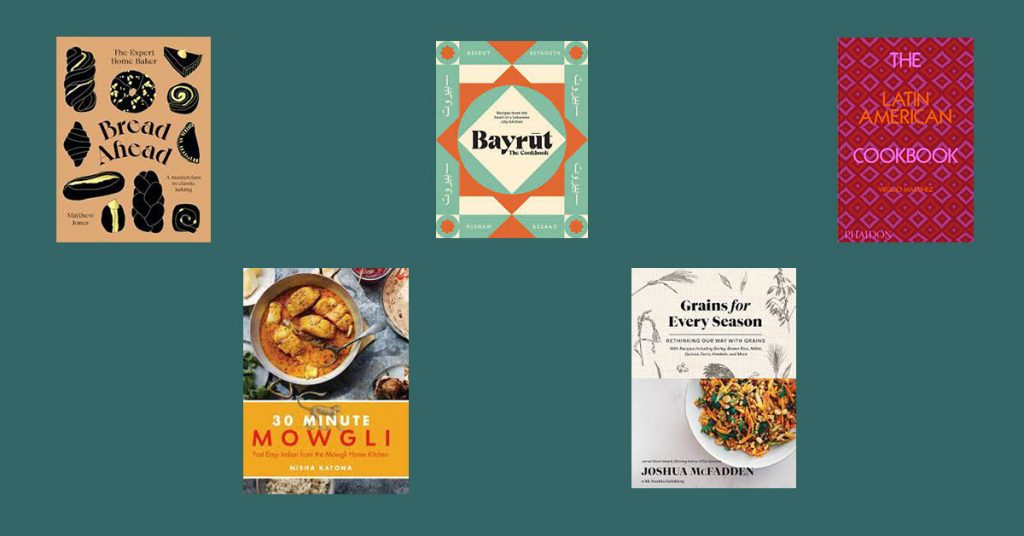 It’s November, and time once again to round up food and cooking books released this month.

See also: Four of the best barbecue books published in 2021

As ever, I bias the selection in favour of less well-known authors and try to choose titles that offer readers a compelling story and cuisine to learn more about – or a clear opportunity to improve their cooking.

It might be the prospect of both winter approaching and the excess of the festive season, but for the most part I seem to have picked out books that feature lighter dishes from far-flung places. Enjoy!

Published by Nourish Books on 9 November

Nisha Katona is the creator of Mowgli Indian restaurants, a runaway success offering cities across the UK Indian food with a difference.

Instead of British-style curries, Mowgli is inspired by dishes eaten in India, in many cases with a contemporary twist.

And in this, her third cookbook, the focus is on light, healthy Indian food (and one chapter on pasta!) that can be whipped up at home in less than 30 minutes.

Some of the 100 recipes include:

• Back of the Fridge Curry

Published by Smith & Baxter on 3 November

This tome collects a frankly extraordinary 600 recipes from 22 countries, and is one that I can’t wait to get a copy of and review in more depth.

Virgilio Martínez is another chef who has featured on the Netflix series Chef’s Table (Like Rodney Scott, whose new book we recently featured) and is a passionate advocate of food from Latin America – particularly Peru.

His flagship restaurant, Central, in Lima, Peru, is often regarded as one of the best in Latin America, if not the world.

The book is described as documenting the ‘vibrant food and culture of one of the earth’s most extraordinary geographical regions’.

It certainly looks like an exhaustive account of a cuisine that may not always enjoy the prominence it deserves here in the UK.

Bayrut: Recipes from the heart of a Lebanese city kitchen

Food blogger Hisham Assad built up a loyal following on his blog, Cookin5m2, for his bright and beautiful dishes that showcase the food of Beirut, the capital of Lebanon.

In this, Assad’s first cookbook, readers are promised a showcase of the city’s food, both traditional fare and more modern interpretations of Lebanese dishes.

Beirut is considered a melting pot of influences and cultures, which is reflected in the diverse food offered.

Bread Ahead: The Expert Home Baker A Masterclass in Classic Baking

Published by Hardie Grant on 11 November

If you have ever wandered around Borough Market close to London Bridge, you may have noticed a big glass room full of would-be home bakers on a course from Bread Ahead.

What began as a market stall is now three baking schools and five sites across London – and now, a cookbook that says it will hand readers the knowledge required to become an expert home baker.

Recipes include both sweet and savoury classics like Victoria sponge or chocolate chip cookies, as well as seasonal bakes such as mince pies and Christmas puddings.

As this is a book from someone whose business revolves around making people better bakers, I have high hopes that it will be a valuable addition to the Food Book Reviews bookcase and one that I hope to review in more detail soon.

Grains for Every Season: Rethinking Our Way with Grains

Published by Artisan in November

Flicking through Joshua McFadden’s first book, ‘Six Seasons: A New Way With Vegetables’, is enough to make you feel more healthy without tasting a thing.

Dishes are complex, fresh and visually stunning. Joshua clearly cares about the ingredients he is using, and great care is taken to elevate individual vegetables into creations that sound, look and taste great.

This latest instalment focuses on grains and gives them the same treatment. Rather than organised by season, as the vegetable book was, 200 recipes in this new title are organised by grain type.

And if you thought creativity would be required to put 200 recipes about grains in one book, you would be right.

Like our guide to Latin American cooking, above, this might be the only book about grain cookery you ever need.

As an Amazon Associate, I earn may earn a small commission if you use the links provided to purchase one of these books.